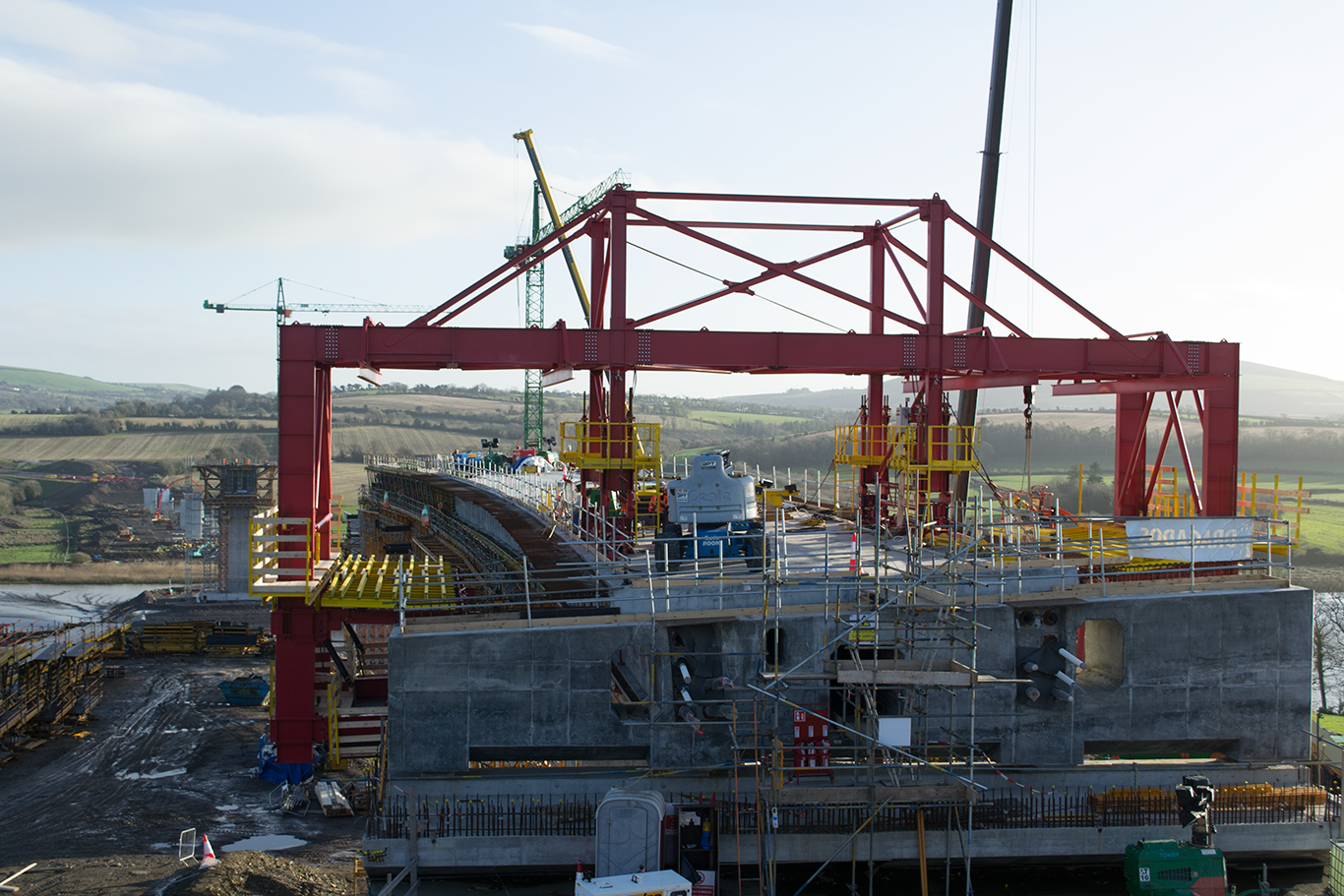 Starting the year with the development of the Wing Traveler solution for the N25 Bypass in New Ross, Ireland, which contract was confirmed end of 2016 by NRJV (New Ross Joint Venture). The solution adopted for this deck’s geometry was a double frame structure with a gap between them of 6 meters, and a movable lateral platforms that withstand not only the pouring concrete, but also the precast slabs and its positioning prior pouring. This solution has coded internally as VL-R75/9.75-HV, which means hydraulic regulation of transversal and longitudinal slope, with variable width (from 24 to 22 meters variation). The solution was designed, manufactured and supplied in July 2017. The cycle achieved is 4 days per 9,75 meters length of deck’s wings (the length of one pour), starting to be used since December 2017. This structure (1 structure supplied) will be used in North and South approach viaduct.

In the framework of the same project, the NRJV also requested 3 FT’s (Formwork Travelers in balance cantilever construction method) for the main extradosed bridge (270 meters free span). It was developed a solution able to be assembled in 12 meters of deck (hammer head), with a 6.5 meters length of casting. The solution adopted is coded as VTC-R1700/6.5-HVT, with variable depth, hydraulic regulation and vertical webs. This solution is already assembled and on its first pouring. Cycles estimated in 7 days per segment of 6.5 meters. Rubrica supplied 3 FT’s, and end 2017 was ordered new one due to the needed of finish works end 2018.

The 2017 already includes the contract for the NRL offshore viaduct (“Nouvelle Route du Littoral“), which is one of the biggest project that UE and France Government are developing in La Reunion Island. The project is based on a 5,4 km highway constructed offshore. Rúbrica has developed a “Mattress connection structure” which will be able to withstand more than 2000 tones of load, and will automatically release the load on the sea bed (estimated in 15 meters depth as maximum submerged distance). The solution is for protecting the pier base against scouring processes, that are highly probably to be developed in cyclonic events. All the functionality of this structure has been designed for working underwater. It is expected to start the work on early 2018.

Inside the Special Projects division, it has been developed the refurbishment of the Togo’s harbor dock, by using a solution of vertical submerged form wall, which generates an impermeability between the seawater and the area to pour, enabling the pouring of special product for the correction of existing finishing surface. The structure has 17 meters height, for the 15 meters depth of wall to refurbish. It has been designed in 2017, and it is already assembled in early 2018. The solution is being tested (one of the three units supplied) and will initiate their work in mid 2018.

In addition to previous division of Special projects, it has been developed and delivered a self-launching truss for the Syncrolift Joint Venture, in Barcelona. Special point of this project was the floating system for the launching procedure, and the manufacturing, deliver and assembly period of time that, due to clients request, which was less than 8 weeks. The coordination and production personnel of Rúbrica Bridges department had the responsibility of coordinate all manufacturers, suppliers and deliveries in less than 2 weeks, making available the structure in 4 weeks on site for starting the assembly. The cycle, after 9 segments, is less than 7 days (limited by the slab resistance for supporting next pouring).